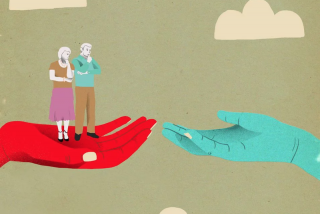 In the below article, the author discusses a type of insurance product my firm recommends for many of our clients. It’s an interesting article. The key correction I’d like to make is, it’s not just for the “affluent”.

Maybe it’s a case of semantics, but affluent when you’re in your 60s, 70s or 80s usually means at least several million dollars in net worth. Fact is, many of our clients have a net worth below one million dollars, and yet they choose to purchase an insurance product — like those discussed in the article — which offers the following benefits:

These insurance solutions are affordable, and merely require a health exam. They are a safe, conservative solution for those individuals concerned about potential long-term care costs and who also want to preserve their estate for their heirs.

Last year, after finishing with college tuition for their three children, Jessica Galligan Goldsmith and her husband, James, treated themselves to something she had long wanted: long-term-care insurance.

It hasn’t been cheap. The couple, both lawyers in their mid-50s, will shell out more than $320,000 between them over a decade. For that, they will be able to tap into benefits topping $1 million apiece by the time they are in their 80s, the age when many Americans suffer from dementia or other illnesses that require full-time care.

Plus, the policies pay out death benefits if long-term care isn’t ultimately needed, and most provide 10% to 20% of the original death benefit even if the long-term-care proceeds are fully tapped.

Such policies that combine long-term-care coverage with a potential life-insurance benefit are called “hybrids,” and they are reshaping the long-term-care niche of the U.S. insurance industry just as it had appeared headed for obsolescence, financial advisers say. The Goldsmiths were among 260,000 purchasers last year nationwide of these hybrids, according to industry-funded research firm Limra, far outpacing the 66,000 traditional long-term-care policies sold in 2017.

When long-term-care insurance took off in the 1990s, insurers aimed for the broad middle class of America. The pitch was that policies would save ordinary families from entirely draining their savings, leaning on children or enrolling in the federal-state Medicaid program for the poor. (Medicare pays for nursing-home stays only in limited circumstances.)

Now, many insurers are finding their best sales opportunity with wealthy Americans. Many of these people may be able to afford costly care later in their lives, but they are buying the contracts to protect large estates, advisers say.

Ms. Goldsmith wanted long-term-care coverage partly because her legal specialty is trusts and estates and she has seen families whose seven-figure investment portfolios were devastated by years of care for spouses.

“What felt like a good nest egg” can be hit by “astronomical expenses,” says Ms. Goldsmith, of Westchester County outside New York City. Their policies are from a unit of Nationwide Mutual Insurance Co.

According to federal-government projections, about a quarter of Americans turning 65 between 2015 and 2019 will need up to two years of long-term care. Twelve percent will need two to five years, and 14% will need more than five years. At $15 an hour, around-the-clock aides run $131,400 a year, while private rooms in nursing homes top $100,000 in many places.

Hybrids can cost even more than traditional standalone products because they typically include extra features. There is wide variation across the hybrid category and the type the Goldsmiths bought (known as “asset-based long-term-care”) includes a particularly valuable feature: a guarantee that premium rates won’t increase.

Traditional long-term care policies fell from favor in the mid-2000s after many insurers obtained approval from state regulators for steep rate increases—some totaling more than 100%—due to serious pricing errors. In May, Massachusetts Mutual Life Insurance Co. began applying for average increases of about 77% that would apply to about 54,000 of its 72,000 LTC policyholders. Until this move, MassMutual hadn’t previously asked longtime policyholders to kick in more to better cover expected payouts.

Affluent buyers also can afford to pay for their hybrid policies within 10 years, as many insurers require. However at least one big carrier, Lincoln National Corp. , has begun allowing people in their 40s and early 50s to spread payments over more years, provided they fully pay by age 65. 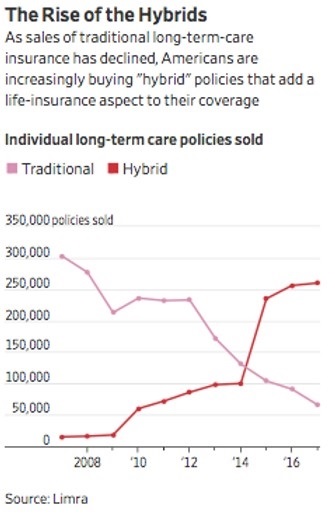 Besides the death benefit—which is as much as $432,000 on a combined basis for the Goldsmiths—hybrids also include a “return of premium” feature. This allows buyers to recoup much of their money if they want out of the transaction, albeit without interest.

About a dozen insurers still offer traditional long-term-care policies that typically lack those features. They charge more and provide shorter benefit periods than they did in the past. But Tim Cope, a financial adviser in South Burlington, Vt., for insurance brokerage NFP, says the good news is that “policies continue to pay for much-needed care, and changes in their policy design, pricing and underwriting are an effort to minimize premium increases on recently issued and new policies.”

Ms. Goldsmith says she was attracted to the Nationwide hybrid because it doesn’t require submission of receipts to obtain the long-term-care proceeds. Benefits are payable in cash when a physician certifies a severe cognitive impairment or inability to perform basic activities, such as bathing, eating and dressing. Payments are capped at specified monthly amounts. For the Goldsmiths, the monthly benefit starts at $9,000 per spouse and grows with an inflation adjustment to more than $15,000 in their 80s.

“Receipts are very hard for older people to deal with, especially when stressed by caring for a disabled spouse or being disabled themselves,” Ms. Goldsmith says.